I received a few requests for a bit more detail on various things that I do for flights.  Here's a procedural of preparing one of my trackers for flight. 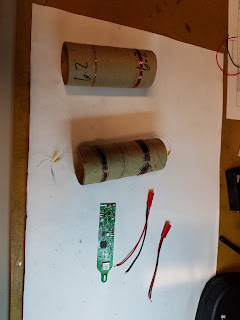 Here, I've started out with the antenna and counterpoise pre-made and spooled onto a few tubes.  Note that the tare weight of the tubes is recorded on them for later, when I weigh the entire assembly.

I go ahead and remove the JST connectors I used for testing of the solar and supercap inputs. 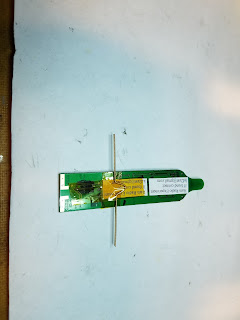 I attach a few "If found" labels, just in case, and put on a 2.75" cross piece that will hold the solar panels.  I really need to replace this with something a touch lighter.  I don't go too crazy taping it down, as there will be more tape added later which will stabilize the cross-piece. 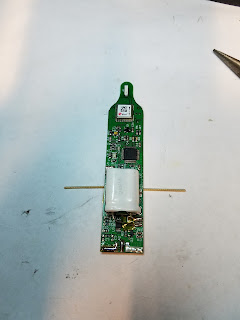 I trim the leads on a supercap, and solder it to the two supercap pads on the right side of the board.  In Wisp2, I'll probably have holes in the board so that I can simply install this like a through-hole component. 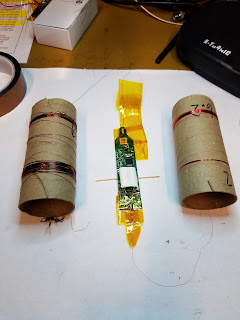 Next I attach the counterpoise (left spool).  It has some 30lb fishing line on it.  I tie that through some securing holes on the top of the tracker, assuring that I have slack on the magnet wire counterpoise.  The idea is that the fishing line is always shorter than the wire, so that it takes all the strain.

After soldering on the counterpoise, I tape it pretty heavily.  That's all the tape near the top.  The reason is that I don't want the counterpoise wire twisting and wrapping around the GPS chip antenna a the top of the board.  That would end up causing problems.  In Wisp2, I'll think about better ways position the chip antenna and counterpoise to reduce the amount of tape needed for this.

Finally, I attach the antenna wire (right spool).  It's soldered onto the antenna pad, and a bunch of tape strain-relief is applied. 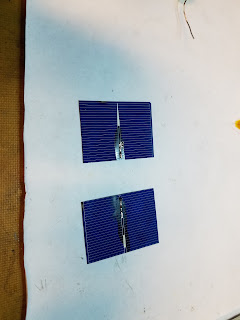 Next, I get a few solar panels and tin the leads on the glass. This is a fussy business, as the panels will crack if heated too much.  I swipe on some liquid flux, and take a very wet iron, and basically paint the solder across them.  I do it top and bottom. 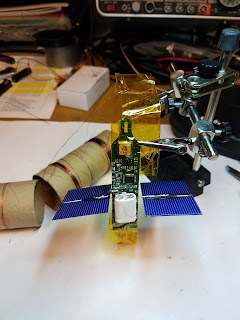 The panels are then soldered onto the cross-piece making a series circuit.  I use a few short lengths of wire-wrapping wire to make the connections to the Wisp (left side, above the solar panel). 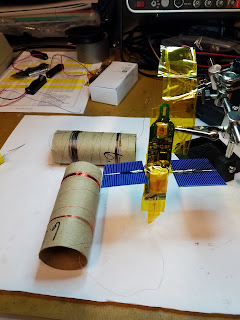 After that, I wrap the board in more tape to weatherproof it, and strain relieve the supercap and wires going to the solar input.  Voila.  Ready for flight.