Having modified a camera and built a controller, I wanted to fly it to see how the camera worked.  I assembled the payload into a foam box and rigged it up with a parachute.

Photos of the launch


Are available in this album

The flight followed the prediction almost exactly!  It landed 10.24 miles further SSE than predicted. The parachute performed very well.  I need to re-measure it to assure it's a 30" (and not 36") chute. That might explain the discrepancy.  NB: I measured it.  Yup, it was a 36" chute.  That explains a lot! 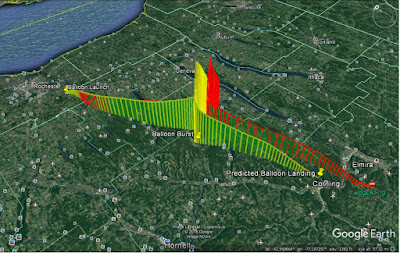 Charts in aprs.fi showed the internal tracker bottoming out about -39 degrees celsius, and the external tracker at -42c.  I didn't work really hard on taping up the box, but it seems that such a large open box with a still camera really doesn't have much thermal mass.  It'll be interesting to see how that changes when I have a video camera in there on the next flight.