So, I've gotten the bug to chase weather balloons.  The balloons in my region are launched by the National Weather Service from a location adjoining the airport in Buffalo, New York.   Only a small percentage of the balloons make it southeast enough to be within reasonable chase distance from my home near Ithaca, New York, 110 air miles away.  I ran manual predictions every day, to see how the balloons might progress, but that got tedious.  I decided some automation was in order.

To begin, I picked up the CUFS Prediction Wrapper for python.  It provided tools to download the latest NWS prediction data as well as tools to run predictions.  I run a Raspberry Pi at home, so I set up cron jobs to load the data each morning, and to run predictions for the next 7 days.

I set up a cron job to download the wind data at 3am each day:

The contents of the "wind_grabber.sh' script are as follows:

The lat/long as well as latedelta/londelta parameters are sufficient to include most of the likely flight locations of a weather balloon out of Buffalo.  I cache the results in /tmp/gfs on the pi.  "-f 180" is looking for the next 180 hours of predictions (7 1/2 days).

The result is that I have current wind data automatically downloaded on a daily basis that should cover the areas of interest for any NWS flights.  Since I do my own High Altitude Balloon launches, as well as pico flights, I don't feel too guilty about downloading this data daily.

Todo: I'd like to find out when the NWS uploads the data, and tune my download and daily prediction schedule to use the latest data.

I was curious what the best parameters would be to choose for ascent rate / descent rate / and burst altitude for the NWS balloon.  Fortunately, two of the three are provided on a regular basis by the NWS.  They have an index with the codes for all the launch locations. I was able to download a big file with all of the flight data from the last two years of flights.  I stuck it in a spreadsheet, and did some number crunching.  I had to eliminate a few flights that were clearly outliers.  They had really screwy ascent rates or burst altitudes compared to the rest.  I removed the anomalies that had glaring differences, and ran averages on the remainder.  I got the following averages.

Unfortunately, the NWS doesn't log the descent data, so I don't have a good measure of the average descent rate of the sondes.  Based on conversations with folks who do this, it seems like most people go with 5m/s.  It can vary widely however.

Todo: If I get a fully automated station running, I'd like to get better data about descent rates and decide how to handle it.  I might use an average, or I might do predictions on each end of the range.

The CUSF software makes it really easy to run predictions.  I run them after I download the GFS data.  I haven't measured the typical download rate yet, so for now, I run them 90 minutes after the  wind data download.

The prediction script is a bit more complicated than the download script.  I started from the sonde_predict.py script provided by the CUSF wrapper and made three principal mods.

After the prediction runs, I take the final landing coordinates and determine whether they are "nearby" Ithaca.  I do this with a Point in Polygon (PIP) algorithm.

I used Google Earth to draw a bounding box covering an area around Ithaca in which I was willing to search for balloons (Add / Polygon).  I then exported the polygon to a KML (right-click, Save Place As),  I was then able to grab the coordinates from the KML file, and just copy/paste them to create an array in the code.  Note, I had edit the data to reverse the lat/long coming out of the KML file to make them more friendly.  In retrospect, I could have left them reversed, and just reversed the order in the code below.  Still, I think this is more "human friendly" to see them in the typical order.

The coords of the prediction of the payload are in the script in the flight_path[] array, so we grab the last position.

Then we can determine whether it's in the "nearby_coords" polygon we've established:

If we're within the "nearby_poly", I add the KML plot to a separate list.  I modified the provided script to generate two KML files.  One for "all' predictions, and one for "nearby" predictions.   I write both of the predictions into an HTML directory for the web server I run on the Pi.  That makes it trivial to download them to my laptop to inspect them with Google Earth.

In the image below, I highlighted the bounding box for my "nearby" predictions. 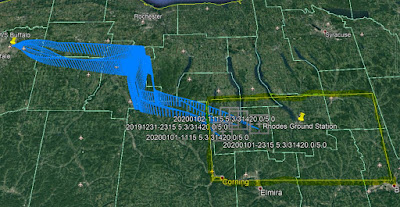 Todo: I'd like to find a way to provide a link into google maps which will show the 2D representation of the prediction by just clicking a link, rather than having to download a KML file and launch Google Earth.


Disclaimers: Shipped by weight not volume.  Some settling may occur during shipping.  Not actual size.  Consult your computer professional before running.  If this code causes and erection lasting more than 4 hours, consult a physician.. no, seriously!


# Parameter Variations
# These can all be left at zero, or you can add a range of delta values
launch_time_variations = range(0,168,12) # Every 12 hours from now until 7 days time.

# Iterate through the range of launch times set above
for _delta_time in launch_time_variations:

# If we only get a single entry in the output array, it means we don't have any wind data for this time
# Continue on to the next launch time.
if len(flight_path) == 1:
continue