The National Weather Service in Buffalo, NY launches two weather sondes per day.  They presently use Lockheed Martin LMS6 Radiosondes running at 1680(ish) MHZ and intend to continue running the until sometime in 2020.   Since I'd like to track them, I wanted to build an optimized antenna system.


The LMS6 uses a Left Hand Circularly Polarized (LHCP) patch antenna.  (Note: I read this somewhere, but I'll be darned if I can now find the information.  If you happen to have documentation of that fact, I'd love to have it!)  Therefore, for best range, I opted to build an LHCP antenna for my receive station.  Looking online, I quickly found an online calculator and came up with the following model.

Using these characteristics, I used Fusion 360 to design a "holder" for the spiral of wire I would use for the antenna.  I configured a 1/4" x 20 threaded mounting hole in the bottom so that it could be screwed down to a reflector, and the same threaded rod could be used on the bottom to secure a 1/4" x 20 coupling nut.  That nut could be used to mount the reflector on a standard camera tripod. 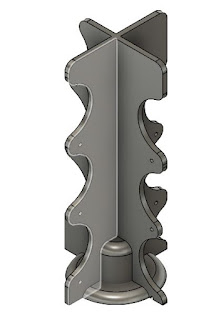 I used bare 16ga wire for the element.  I pre-wrapped it around a 2" mailer tube to get the shape right, and then fed it through the structure.  I bought a lid for a pot at a local reuse store for $1 to use as my reflector.   I installed a bulkhead SMA adapter on the lid, near the base of the spiral.  The result looked like this: 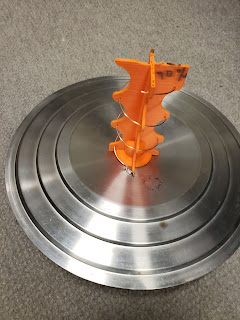 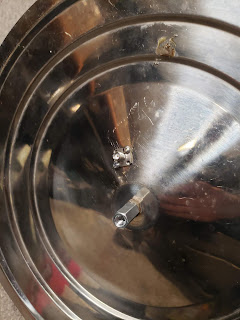 Unfortunately, the online model does not account for velocity factor.  When I did an SWR measurement on the antenna, it was out of tune in the frequency of interest.  I did about 1/2 dozen prints, and resolved that 95% velocity factor was the ideal for this design.

With those parameters, I ran a VSWR plot, and it looked great!  The plot is centered at 1680 mhz, and the two markers are at the approximate end points of the range of frequencies we might see from an LMS6 sonde running at 1680 mhz. 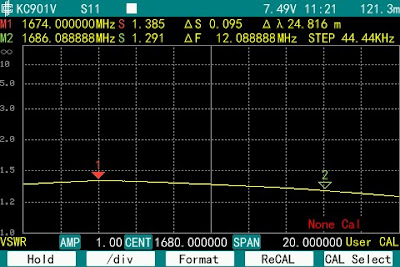 I took the antenna out and compared it to a 1/4 wave dipole antenna (which also has very good VSWR) and the results were significantly better.  I was running two Raspberry Pi's in my vehicle, running radiosonde_auto_rx software with identical SDRs and preamps.  The helical began receiving the sonde about 30 miles (48 km) distant.  My dipole running, simultaneously, did not beg receiving the sonde until about 10 miles out.  That's only one data point, so far, but I'm pleased by the initial findings.

Here's an image of my chase vehicle, with a dipole duct-taped to the roof rack, and the helical set up on a tripod beside the car. 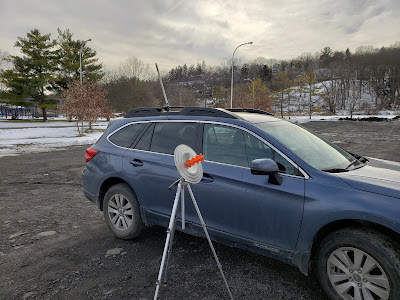 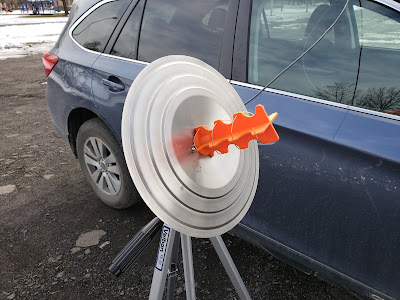 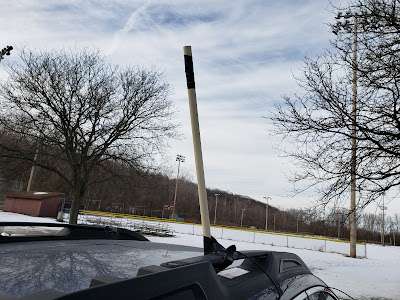 I'd like to gather more side by side comparisons of the performance of these antennas during radiosonde hunts.  That will be greatly facilitated if one of them (finally!) lands somewhere that I can retrieve it.  My area of Central New York State features an awful lot of tall trees!  Once I have one in hand, I can use it for real-world signals in a more controlled laboratory environment.