A friend of mine, Jim / N2NXZ, let me know that he was launching a Pico Balloon with a WSPR tracker on it this afternoon.  I had all the pieces necessary to set up WSPR at the W2CXM shack (I'm the club advisor), so I decided to run over at lunch hour and set it up.

We had received a Signalink USB with some Club funds within the last week.  I took it over and set it up with the Kenwood TS-2000 we had in the shack. 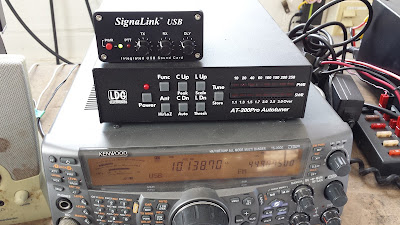 The TS-2000 is hooked up to our Butternut HF-9 vertical, atop the center of Barton Hall.

I went ahead and tested it with Ham Radio Deluxe (I had used my personal Signalink with the club TS-2000 previously, so I just wanted to make sure everything was still configured well.  With a few PSK31 receives, and a test transmit, it all looked good to go!

I installed NTP software, configuring it to point to the campus time servers (critical for WSPR), and then installed WSPR software.   I set it up to listen on 30m.  I immediately started getting some data. I went ahead and configured WSPR to uplink the "spots" to the WSPR stream, so that they are available on the internet as "http://wsprnet.org". 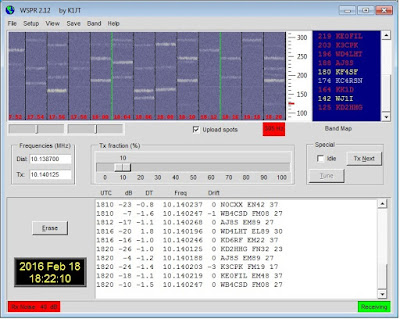 The columns of waterfall data are in 2 minute chunks, with most recent on the right, and oldest on the left.  They represent signals we're receiving within the band reserved for WSPR signals.  I got things pretty much sorted out, and sure enough, I started receiving Jim's balloon! 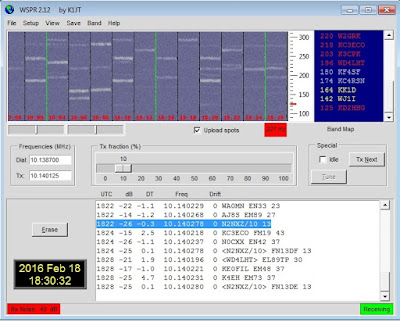 For a good chunk of his flight across southern New York, W2CXM was the only station receiving him.  I was grateful that I had taken the time to set it up!

I configured the software to transmit "10%" of the time.  That means it should be transmitting W2CXM's information out every 100 minutes or so.  I looked later in the day at the WSPR map. Even transmitting with a mere 5 watts, we were received all over the world! 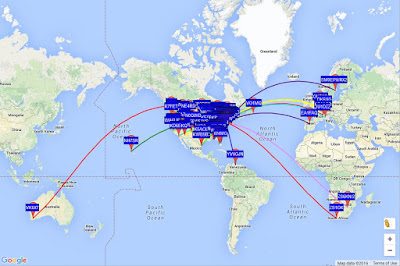 Every blue square is a station that received us in the 12 hours, or so, that the WSPR station has been running at W2CXM on 30m.  Pretty cool!

I've left WSPR running at W2CXM.  It's a nice addition to the station, and will be helpful as we work on Balloon launches in the future.
Posted by kd2eat at 8:23 PM