I'm in the midst of designing a small WSPR tracker based on SMD technology for use with Pico Balloons.  I hope to attempt a circumnavigation with my design and home built envelope.

My tracker will be using a Silicon labs Si5351 CMOS clock generator.  Per the datasheet, the clock generator is spec'd to an 50 ohm output impedance.   Note, that there are different Si5351 parts. The "-B" parts seem to be the ones you can find now, and they have 50 ohm termination.  The earlier non-"-B" parts, were rated at 85 ohm.

Looking at the output of an Adafruit Si5351 protoboard on a spectrum analyzer, the output signal would definitely benefit from some filtering.There are some sizable harmonics. 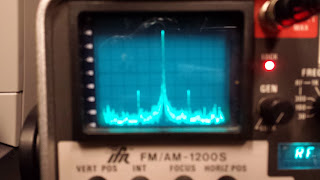 First pass at a filter plan

I'm new to RF design, but as I understand it, I should probably have a DC Coupling Capacitor as well as a filter network.  I'm going to begin with a simple Pi Lowpass filter and see how that goes.

The target output frequency is on 30m, at about 10.1 Mhz.  I found the following gem on the interwebz, so it must be true:

I found a Chebyshev Pi LC Low Pass Filter Calculator on the web.  I plugged in values as documented below: 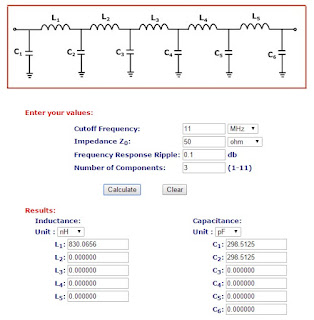 I'm not an RF guy, so I have no idea if I've done any of this correctly.  In particular, I have these questions:

I'll update this into more of a "This is what I did" document as I finalize my design.
Posted by kd2eat at 6:22 PM