As per the previous flights.  Nothing particularly warranting new photos.

It was a glorious day to launch from my building! 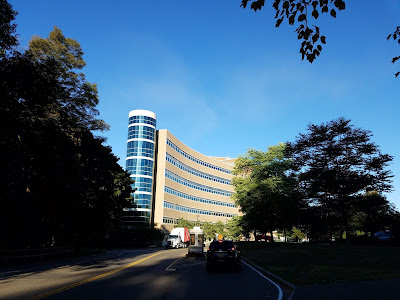 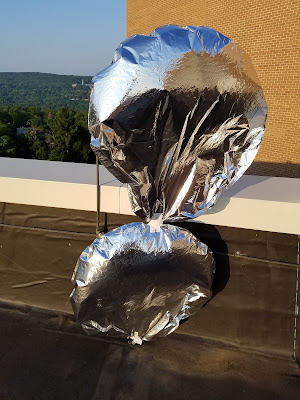 Here are pictures of a pair of balloons in the same configuration as I launched today.  I just didn't happen take a picture of today's balloons.  Today's were filled with hydrogen, and looked a little less full than these. 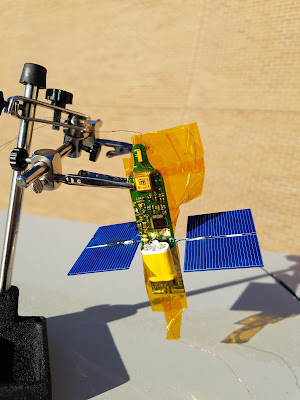 Here's the tracker, getting it's first lock and doing a transmit test prior to launch.  Note the blue LED illuminated on the left side.  That's the transmit light. 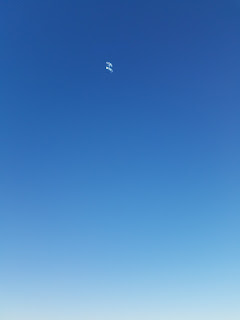 And it's off!!!!  The winds were calm.  It went basically straight up!   You can see the tracker dangling below, and if you look carefully, the antenna hanging below the tracker.

It flew 370 miles, starting in grid square FN12sk and ending in FN51hl.  More statistics are in the table at the bottom of the blog. 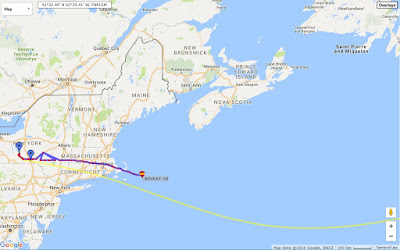 The altitude with the hydrogen was quite nice.  It floated comfortably around 10,333 meters, peaking at 10,666 a few times.

The GPS still had a few late locks, but none missed and no resets to speak of.  There IS a problem with the new telemetry packet.  They were sent on schedule, but there seems to be a problem which is causing the telemetry callsign to be garbled at times.  I'll have to investigate it more.

The antenna performed VERY well.  Below is a map of the stations that received it today. 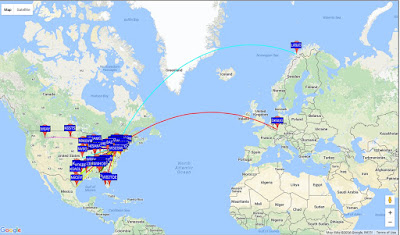 Predictions for the future still look pretty consistent.  It's going to loop around Europe, if it makes it there.   The weather ahead looks clear, so barring any problems, I'm optimistic that it'll be there in the morning. 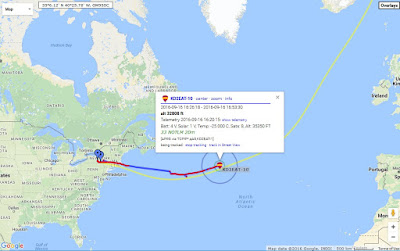 The altitude held steady at about 10,777 meters throughout the day. 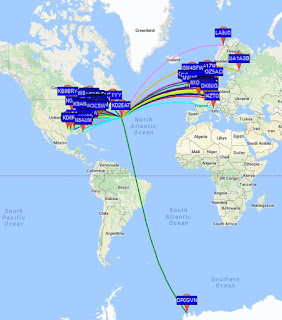 APRS coverage was great throughout the day.  Here's a map of the stations that received the tracker today. 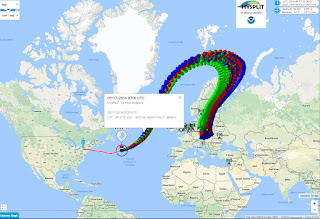 The prediction for the coming days has improved.  It looks like we may not loop-de-loop after all.  It's hard to be sure, but at least this hysplit model shows it curving out to the southeast, instead of back northwest!
I tagged the bubble that should be about where we wake up in the morning.

We did have one GPS reset today, and the new telemetry packet confirmed it.  The transmit sequences should be 10 minutes apart.  When we're late, it'll be some multiple of 2 minutes later.  The GPS is reset if we can't get a lock for 5 consecutive minutes.  Well, one of the transmissions was six minutes late.  That indicated that the GPS should have been reset.  Sure 'nuff, when the next secondary telemetry packet came out, on the hour, it showed that a GPS reset had occurred.  Hurray for the new functionality.  There's still a glitch causing some garbled data, but I'll track that down before the next flight. 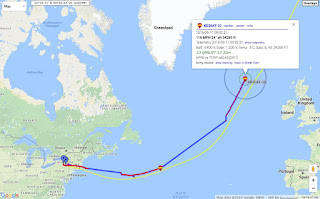 The tracker woke up on schedule at around 4:14am Eastern in grid square HO61li, having traveled 1190 miles overnight.  It was really moving fast today, averaging over 100mph for the day.  We ended in grid square IP26qb after traveling 1105 miles in daylight.  It was a little lower all day, around starting at around 10,444 meters, and gradually sinking to 10,222 meters near the end of the day.  I'm hoping this is due to the high latitude, and not a leak. 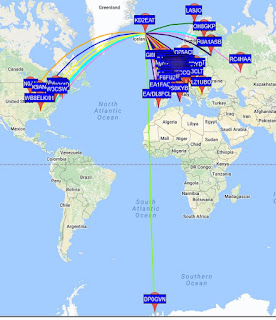 The tracker was received very well throughout the day.  Here's a map of the receiving stations during the 12 hour period of activity. 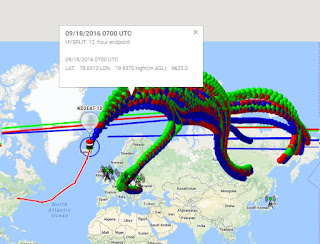 The hysplit predictions are improving.  Many of them now show the payload traveling east, rather than doing a loop-de-loop.  Yay! 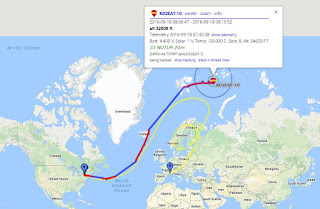 Day 4 went OK.  The tracker awoke on schedule around 2:16am Eastern in grid square KQ18oq, having traveled 1136 miles overnight.  It had slowed down significantly, moving at about 59 mph through the short day.  It only beaconed for about 5 1/2 hours before it the sun was too low on the horizon.  It's WAY up north, and the solar cells don't work so well.  It ended the day in grid square LQ39xc, some 328 miles traveled by day. The good news was that the altitude was up again.  Most altitude reports were at 10,666 meters. 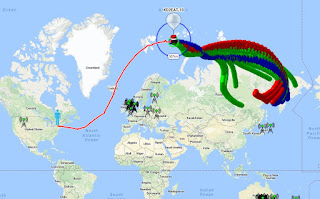 The ensemble predictions for the trip are looking better.  It's most likely to continue east, now, rather than looping around Scandinavia.

Given the short day, I'm guessing it'll be about 2AM UTC (10pm EST) before we see the tracker again. 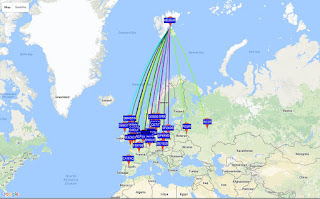 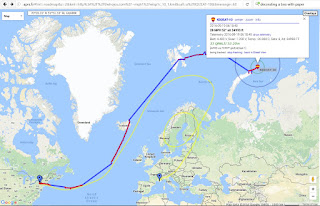 It was a slow day today.  The tracker woke up in grid square MQ36gs, having traveled only 311 miles overnight.  The tracker operated through a very short day cycle - less than 5 hours - due to the angle of the sun.  It ended in grid square MQ67lj, just 108 miles later, averaging 18 mph. Altitude held strong at 10,666 meters for the bulk of the day,. 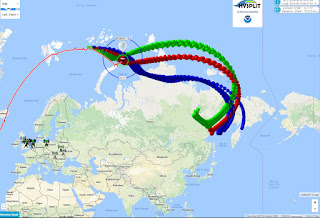 The predictions look favorable for getting pretty well across Russia in the coming days.  Predictions later in the day showed the curves turning east, which is awesome! 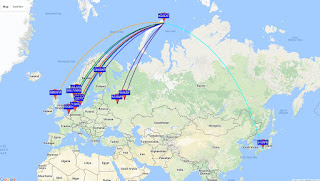 We had very few receiving stations today, though it was gratifying to see that we were received in Japan.  Let's hope that trend continues!   Overall, receive statistics for the day were pretty good, given the low number of average stations receiving packets!

It's "hide and seek" day for the tracker.  No packets received during its short transmission window. Remaining optimisitc that it's just due to the short daylight cycle and extreme distance from receiving stations.

The tracker was not heard from after day 5.  It's unclear what caused the failure.