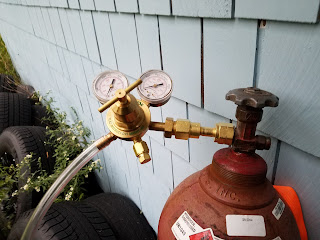 My Hydrogen fill rig, out behind my shed.  Note the long adapter between the tank and the regulator.  That converts from the reverse-threaded connector on the tank, to the standard threads on the regulator that I also use for Helium. 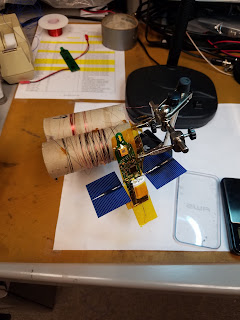 Late night build.  I was rushing to prepare this tracker for the Hamfest.  I was in the office until nearly 1:30am fixing code bugs, and prepping this tracker for flight.  All set, here.  The tracker came out weighing exactly the same as the previous flight - 13.4g.

Launched at 10:15am local time at the Chemung County Fairgrounds, Elmira New York, on the occasion of the Elmira Hamfest. 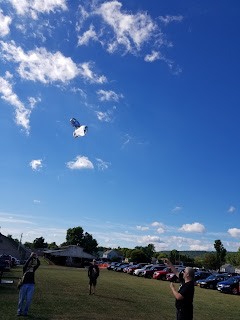 About to launch the balloons.  Note, I'm holding the balloons by the tether, which has the counterpoise attached to it.  This can be risky, as the antenna is just 36ga magnet wire.  I'm careful to assure that the tether is shorter than the antenna wire, so that if it's tugged, it won't stress the antenna.  I had to hold it for a few moments until the breeze let up.  You can see the balloons being pulled downwind.  When I released the tracker, it swung perilously close to the ground before gently rising.  I was concerned we might run into parked cars, but fortunately, the winds cooperated and it took an "up elevator" pretty quickly, clearing all the obstacles. 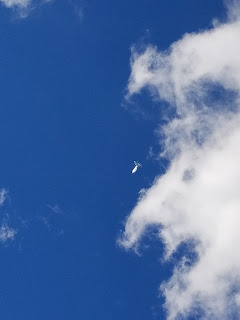 There they go!  There was one fairly hefty cloud overhead, but the skies were overall pretty clear, thankfully! 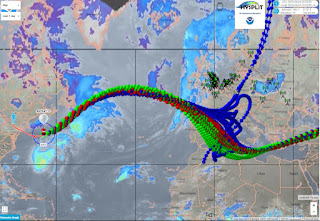 The tracker did well throughout the day.  Final position is there on the map.  It averaged 93 mph and about 10,777 meters..  The hysplit prediction shows some weather ahead.  Let's hope we make it by.  Some of that weather is VERY high.

Reception throughout the day was AWESOME. Here's all the sites that received the tracker today. 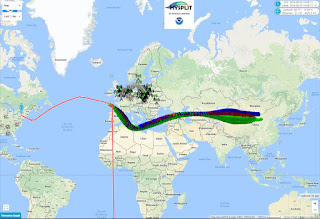 At the end of the day, the hysplit predictions looked really good to continue east.  The downside is that the predictions indicate slower wind speeds. 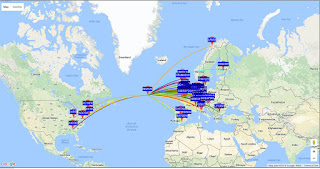 WSPR coverage was excellent.  The lost packets we had during the day were restricted to the morning and afternoon, when the supercap was not fully charged.

The additional telemetry received today was very interesting.  The last few packets from yesterday and the first from this morning.


The two instances of KD2EAT received account for the transmit cycles incrementing from 8 to 10. That lines up.

The number of boots incremented from 3 to 11.  That's quite a few times that the code started up, but the tracker didn't stay up long enough to transmit anything.  I presume these happened both at shutdown time, and boot in the morning.

I think this data speaks to the fact that I need to do more work to stabilize the tracker in low solar situations.  I have code that holds the tracker in a lower current loop until the supercap voltage is over 3500 millivolts.  For the next flight, I'll try increasing that a bit.   Another option might be to enforce a hard-coded delay after first boot of the day, to allow the sun to come up a bit more. 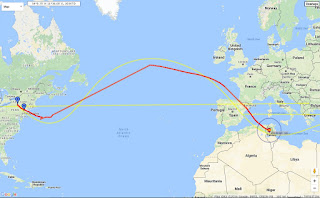 Day 3 went pretty smoothly in terms of flight. The altitude and speed was pretty consistent. The only real problem was with the GPS.  It was having trouble with locks, and my software had to reset it 14 times throughout the day.  I suspect it'll be OK in the morning, but this speaks to a need to put a more complete power off / reset into the next iteration of my board. 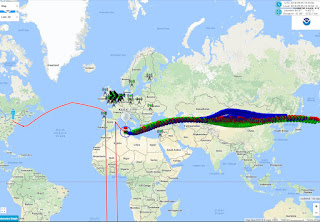 The prediction still looks awesome for the coming days. All models show it going straight across Asia.  This does raise some concerns, as Turkey has some very heavy air traffic near Istanbul.
a 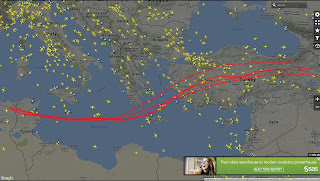 This model depicts the air traffic over Turkey, and the potential routes for the balloon.  Let's hope we keep to a more southerly trajectory and stay away from all the planes!

WSPR reception was extraordinary today, with one station in Australia hearing several of the packets.  Statistics are below in the summary table. 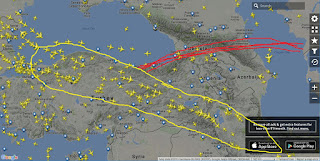 We awoke and safely traversed the Turkish airspace.  The tracker picked up quite a lot of speed overnight, getting back to over 100mph during the day.  It averaged around 10,555 meters in altitude -  a bit lower than previous, but still quite serviceable. 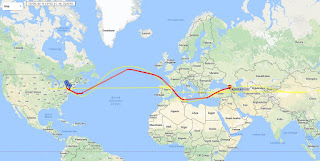 We ended the day in Georgia.  All systems looked nominal.  Interestingly, after days of flight, we ended the day only 50km off the original prediction line!  Wow!

The GPS was still a bit wonky during the day. I'll need to work on better GPS resetting code.  The good news is that we always recovered! 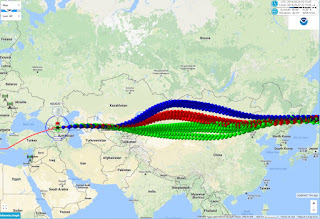 The prediction for the coming days still looks awesome.  Straight across!

WSPR reception wasn't as good today, but still perfectly adequate.  There's no indication that any packets were dropped other than at boot up and power down time. 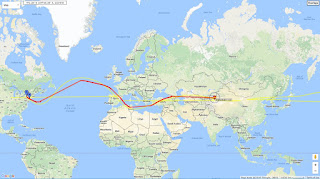 Day 5 was a scary one.  Packets didn't come in until very late in the daylight cycle.  Only a total of 11 packets were received all day, as compared to 900+ on previous days.  Decoding the packets, however, showed the tracker to be in excellent health and floating at 10,777 meters (up from the previous few days).

This station is western Russia was one of the two stations that received packets today.

This Japanese station was the other one receiving packets.    With luck, propagation will be better tomorrow. 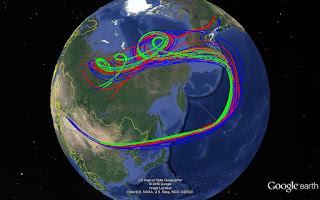 Mark Conner, N9XTN, was kind enough to provide this ensemble prediction for the coming days.  It looks a bit grim.  The tracker may turn and end up looping around northern Russia.  Here's hoping we take one of the few tracks continuing east back to the US, to complete my circumnavigation! 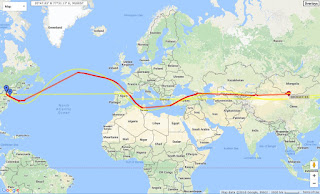 Day 6 was another poor one for received packets. Still, we got enough to document forward progress.  The tracker seems healthy, and is maintaining about 10,666m altitude. 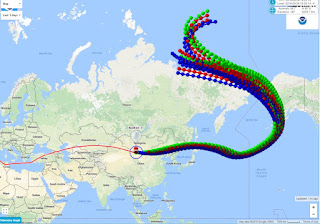 The predictions are going downhill.  Habhub shows the hysplit as hooking back toward Russia.  Bummer! 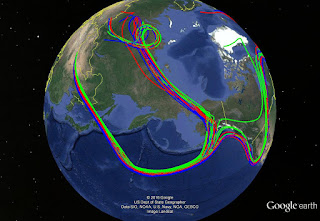 Mark / N9XTN ran up this model.  At least this one shows a few paths coming back toward North America! 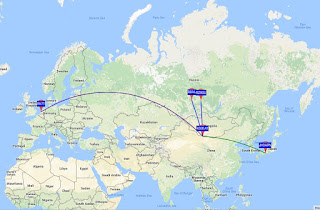 We had a few Russian stations receiving us today.  That was helpful!  Still, pretty poor reception. 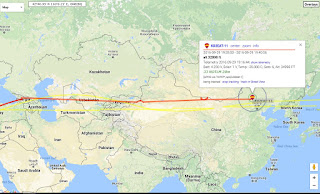 We awoke in Inner Mongolia.  Reception remained poor throughout the day.

Another issue was with GPS resets.  Somewhere between Day 6 and Day 7, the global GPS reset counter went from 5 to 26.  Since the counter wraps at 26, it's conceivable some bug reset the counter to 0, but it's also possible that we had 21 resets.  I'm not sure what happened there.  The data is so sparse it's difficult to tell.  Altitudes were pretty good, at 10,666 all day. 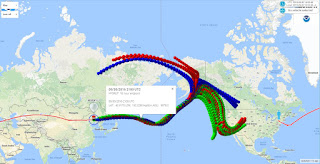 There are now more predictions showing us heading into the US, and fewer back to Russia. That's good news!

Very few WSPR receiving stations, and very few packets received, as seen in the statistics at the bottom of this post. 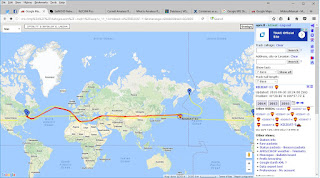 We awoke on Day 8 off the coast of Japan, moving along quite nicely.  We received few spots during the flight day, but all indicated that things were well.  The tracker was a little low, averaging about 10,333 meters in the spots we received, but it averaged 129 mph during the day.  It covered an amazing 1927 miles in the night before waking up, and another 846 during daylight. 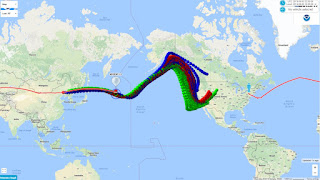 The predictions have improved greatly, showing us coming into the states, with a predicted landfall in California on Monday.  Yay! 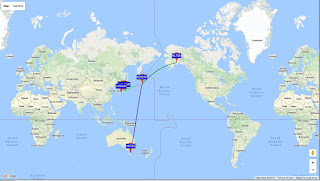 We had very few receiving stations throughout the day, but we had one heroic receive from Australia, and Alaska starting hearing us with regularity. 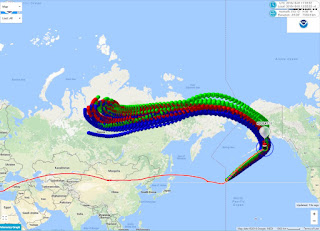 I awoke to discover that the predictions took a HORRIBLE turn.  All indications were now pointing toward a left turn back to Russia.

Sure enough, when the tracker awoke, it was dead on the prediction, and seemingly headed for a left turn. 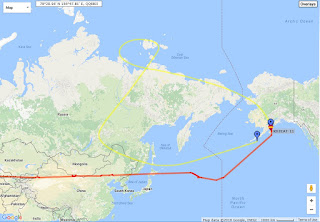 I reran the predictions on predict.habhub,org, and it shows a loop-de-loop in the Kara sea, EXACTLY where my previous flight disappeared.  Wunnerful. 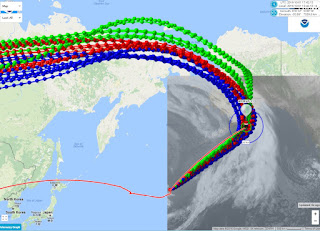 The weather overlay showed an explanation for the problem,  There's a big front right there.  Apparently, those clouds weren't very high, as they didn't seem to interfere with the tracker at all.  Let's hope it stays that way! 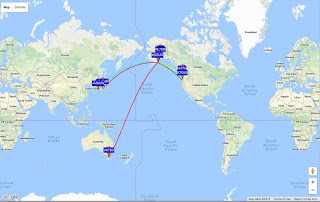 WSPR reception was pretty good today.  The Alaska stations were receiving with great consistency.  Japan and Australia were still helping out.

Let's hope we, at least, fly swiftly on our reprise of Russia. 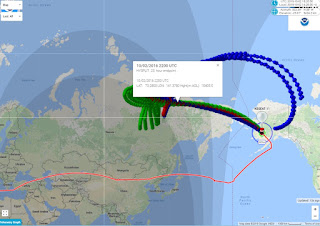 No packets were received from the tracker today.  It was expected to make a late start (more than 24 hours), due to its projected rapid westward progress, but simply never checked in.   It's entirely possible it's not being heard due to its extreme distance from receiving stations.  We'll have to wait and see for a few days.