So, Part 2 of this little journey featured our hero barking up the wrong tree a bit.  I made two mistakes.

The mistakes above led to some seriously confusing results, and some pretty bad sounding signals.

Taking a step back

I decided to do some Science, and assure that I wasn't making any more bad assumptions.  I set up a test environment on my bench so that I could try moving the VC pin between 0 .. 3v3, and see the resulting impact on the signal being generated.

I wired up my Si5351b breakout board to my STM Nucleo-L152RE.  I ran the output into my spectrum analyzer so that I could get a good look at what was happening.  I wired the VC pin to a variable DC power supply so that I could vary it carefully, and see where the signal wound up. 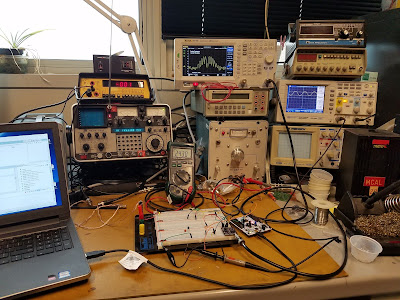 Here are the relevant lines which initialized the Si5351.  I am using the Etherkit Si5351 library.

This is the result. My spectrum analyzer is reasonably well calibrated.  The center frequency of the Si5351b came in at 144.330004 mhz.  Dang.  Not bad at all!  My little breakout board actually uses a TCXO for the oscillator, and I think that helps with the accuracy. 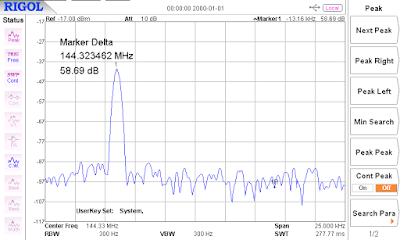 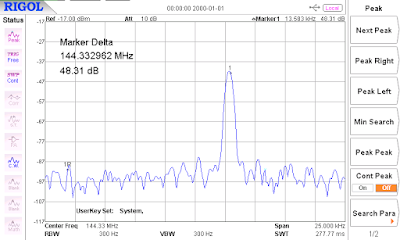 OK, this one, I would expect should show the signal centered up again. 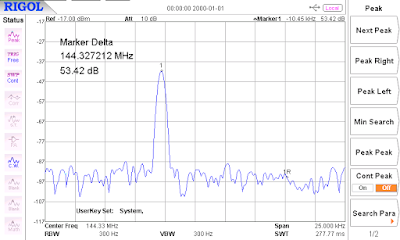 Test 5: What voltage do I need for Center frequency? 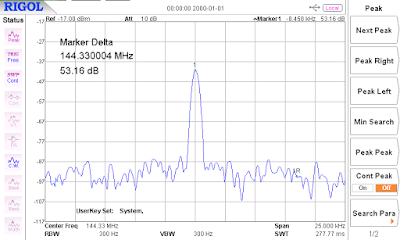 Test 6: How does modulation look at 1.65 volts with the DAC? 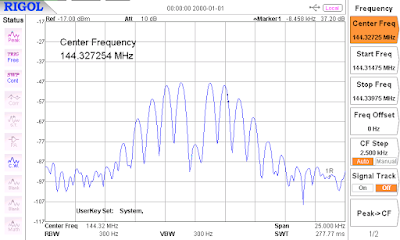 Other thoughts on the frequency error

I suspect that the frequency error has something to do with an error introduced by the multisynth multipliers and dividers.  I'm not too concerned, as I may be able to address it either by using the calibration subroutines, or different multipliers.

Deviation and the PPM value


I also tried a test with 20 PPM (which isn't supported according to the documentation), and it seemed to show the same readings as 30 PPM.

If I understand "deviation" in this context, I think these numbers are too big.  I need to understand this better.

Strictly speaking, the frequency being off isn't too much of a problem.  The Si5351 has a calibration routine which I can use to center this up.  It's just odd that the center frequency is different when using the VCXO.  I'm a little more concerned about the deviation right now.  The lowest deviation setting still seems to be too wide, unless I'm misunderstanding what to expect with regard to this kind of experiment.