My Ublox Neo-M8N GPS with Compass module will need UART6 for the GPS, and the I2C pins for the Compass functionality.  Unfortunately, I want to do Smartport as well, but don't have a UART.  So, instead, I'll use softserial for the Smartport connection.

My configuration will be as follows:

The Softserial ports are available on the Omnibus F4 Pro V2 via two pads on the front of the board.  I followed the FrSky SmartPort using SoftwareSerial procedure at the bottom of the Omnibus F4 page.  They call for a 1k ohm resistor between the RX and TX pins.  I had one in 0603 in my parts bin, so I put it between the pads, and then attached a small wire-wrap wire to the RX pin.  It ended up working fine. 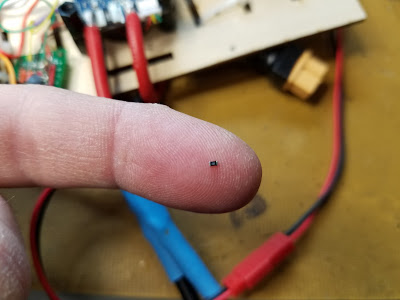 I love surface mount soldering!  Here's a 1K 0603 resistor from my parts bin. 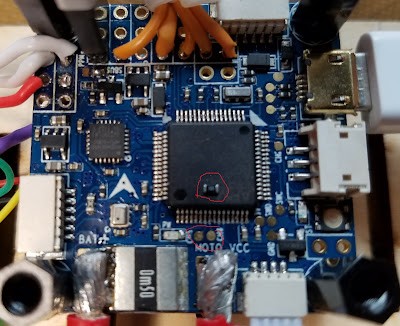 There's the resistor, temporarily sitting on top of the processor.  I circled the two pads it's going to be crossing below. 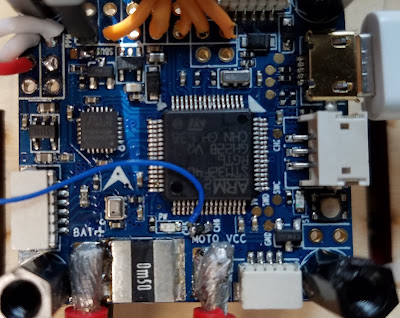 Here's the resistor installed, with a bit of Wire Wrap wire connecting to the RX pin.

After confirming that all worked well, I went ahead and secured this wire with a dab of glue to the top of the processor chip, for strain relief.

In order to use the Softserial port, it needs to be enabled in the iNav Configurator. 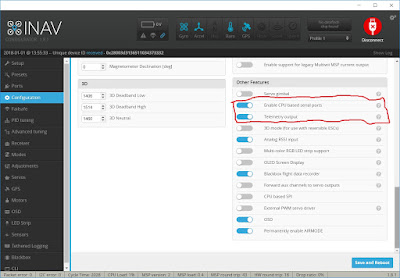 I enabled Softserial, and while I was at it, also enabled telemetry. 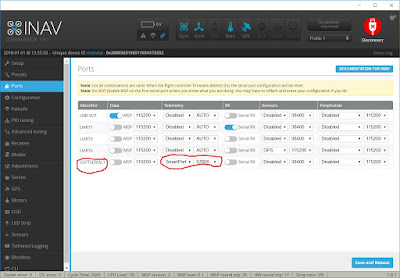 After a reboot, I went into the ports page, found the Softserial port, and configured it for Smartport at 57,600 bps, as suggested.

The final step was to go into the CLI and apply two settings:

Having done that, I was able to go onto my transmitter, do a "discover", and telemetry values populated from the flight controller.

One additional note.  The GPS telemetry does not appear for a "discover" on the radio until you have a GPS lock.  This caused me quite a bit of frustration.  Once the telemetry is discovered, it will be on the list on the radio, thereafter.  You do not have to rediscover it after it is in the list.


The Omnibus F4 V2 uses a tiny little pad in the middle of the board to receive RSSI data from the receiver.  Many people are soldering a small wire to the pad, and just hanging it off the Flight Controller, with a bunch of glue and hope holding it in place.  I didn't really like that solution.  Instead, I opted to hijack the RAM pins to make the RSSI externally available.

The RAM pins on the Omnibus F4 pro V2 are wired together, but otherwise isolated, if you do not solder a jumper elsewhere on the board, linking them either to VCC or the 5v rail.  Since I left the jumper undone, the RAM pins are just tied to each other.    Since I'm powering my Camera and VTX via an external wiring harness, the RAM pins are unused.

I soldered a small jumper from the RSSI pad to one of the RAM pins.  I will then solder a heavier gauge wire into the other RAM pin hole, and connect that to the wiring harness going off to the receiver.  This should provide greater strain relieve for the RSSI jumper.  I think this is a much more resilient solution.  Here's the jumper wire going to one of the RAM pins.  This picture does not illustrate the wire harness leading off the board. 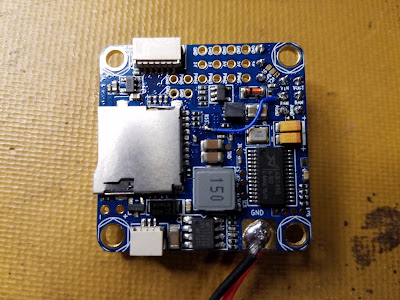 One thing to note.  I was concerned that the RSSI pin might have problems.  The MCU on the F4 board is running at 3.3 volts.  The receiver runs at 5 volts.  I was worried that the RSSI pin might be overdriven by the receiver.  I wondered whether a voltage divider would be needed to scale the voltage down.  Fortunately, FrSky had considered this.  The RSSI value is documented to be a PWM value between 0 - 3.3 volts.  So, even though the receiver is running at 5 volts, it is safe to run the wire to the Flight Controller.  So, the result was, I didn't have to do anything special.  I felt better having researched it, however.