I didn't take a lot of assembly pictures for this one.  This is the 9th board (third board of the third panel).  Pictures of previous board assemblies are in previous flight blogs.

Here's the finished tracker sitting in the sun for a test transmit the day before launch. 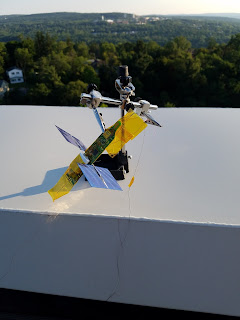 The signal was nice and strong across the road at W2CXM.  The antenna was just laying across the roof of this building horizontally, so this isn't bad, given that it's only transmitting at about 10mW, 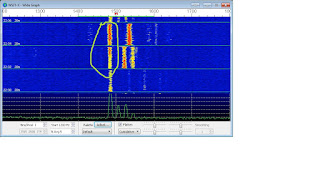 Here's the initial flight prediction.  We'll see how it goes! 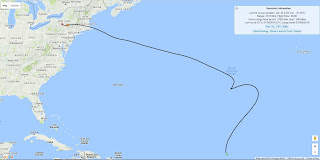 I had to finish balloon preparation at home and take them into the office to attach to the tracker.  As it's the weekend, and my Wife and I are NOT morning people, this means that I got to the office about 2pm. hehe.  Here's the final test on the roof prior to launch.  I used just an inch or so of Kapton tape over the swivel, after securing the balloons, just to make sure that the swivel didn't poke anything, and that there would be a little less friction with the string and swivel sliding around. 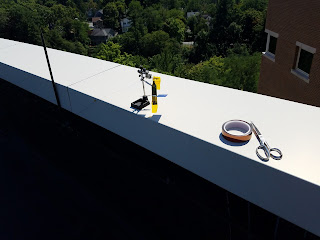 And they're off.  It was a very calm day, and the balloons just lifted straight up and away from me.  Good thing, as I was launching alone, and it would have been tough if I was fighting a breeze! 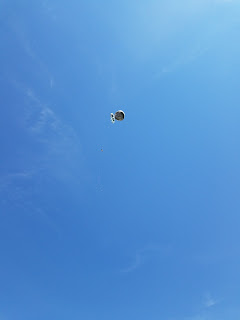 Here's the waterfall, once it was in the air.  Nice and strong, now that it's vertically polarized and away from the building. 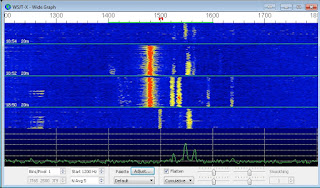 The balloon stabilized about 8,222 meters as the sun was going down.   That's lower than I would have hoped, but it beaconed there 3 or 4 times before the sun set.  We ended the day in grid square FN22xk, having covered 123 miles.   It didn't cover a lot of ground, averaging about 24 mph for much of the flight.   The weather was still clear over New York, so I was optimistic I would see the balloon again in the morning. 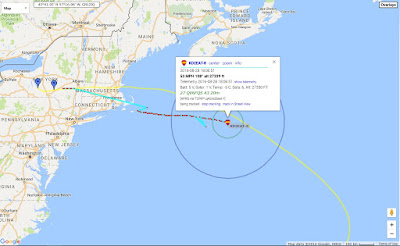 We awoke in grid square GM18nd having covered 398 miles overnight.  The altitude seemed normal at 8,222 meters.  We climbed to 8,333 meters and held there for about a half hour.  Unfortunately, shortly after that, we began a rapid descent.   Within 100 minutes, we fell below 777 meters and lost contact.  That's a rate of about 1.25 m/sec.  Within about 37 miles from our first spot of the day, we were in the water.

At launch, with a free lift of 5g, we had an ascent of about 1 m/sec.  If an envelope had failed completely, we would have had about 37g of dead weight added to the weight of the payload being carried by a single balloon, with 2.5g of free lift.  I think it would have fallen much faster than 1.25 m/sec if we had an envelope failure.  We probably would also have have seen acceleration in the descent.  We really didn't.  It was a relatively steady descent.  I'm guessing it was moisture on the envelopes. 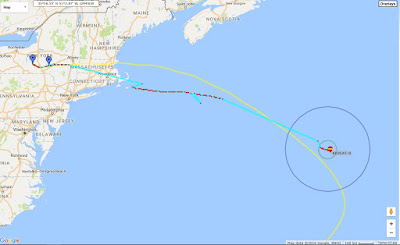 We were just approaching the edge of "Tropical Depression Nine".  I suspect we hit it.  The satellite imagery here might have been a little out of date.  The weather was moving northward. 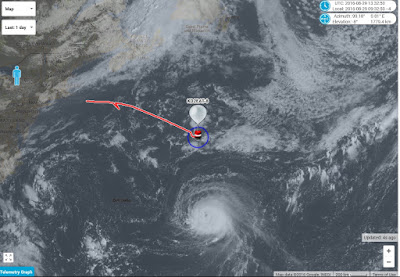