Alan Wolke / W2AEW has a youtube channel in which he does all manner of informational posts about electronics, RF and Ham Radio.    He did a great video showing how to do TDR measurements by using an oscilloscope and a Schmitt Trigger Oscillator which he built up from some scraps on his bench.  I decided to build one for my own use. 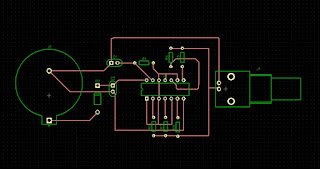 
I had most everything in my scrap box.  I elected to use a CR-2032 (3V) button battery, seen on the left, since it would keep the whole thing small.  I just had to order some Schmitt Trigger Oscillators from Digi-Key. 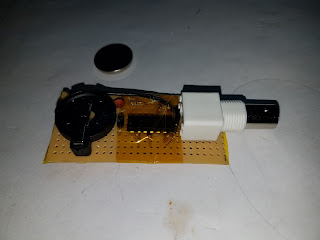 Here's the finished product.  There is some kapton tape wrapped around it simply to protect the bare wires soldered on the bottom.  The BNC plug is crazy glued to the perf board. 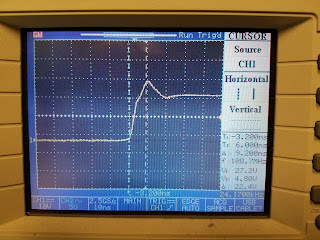 Running my initial test, I found two issues. First, the clock frequency was quite a bit different from Alan's, though I used the same values for the resistor and cap in the oscillator, I thought!!!!

Upon re-watching his video, he used a 47nF cap. I used a 4.7nF cap.  Oops.  Well, the oscillator frequency came out about 24 khz.  That's still completely serviceable.  I opted not to bother fixing it.

The second issue (which I don't understand) is that the rise time is not as fast as Alan observed.  I'm getting a rise time of about 9 ns.  He was getting about 2ns.  I used the same 72AC14 Schmitt Trigger DIP that he was using.  I'm not sure why it might be slower.  Still, even at 9ns, it's perfectly fine, and still much better than the cheap signal generator on my desk (24ns) which is also much bulkier. 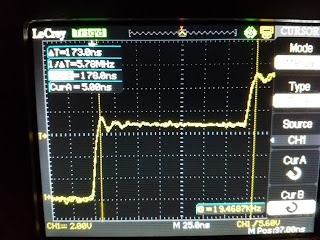 As it happened, we needed to know the cable length in our W2CXM shack between a new location and the antennas on the roof.  I used this Schmitt Trigger Oscillator to measure it.

Kevin / WB2EMS used a proper TDR cable measuring device and came up with 72 feet.  So, we're definitely in the right ballpark. 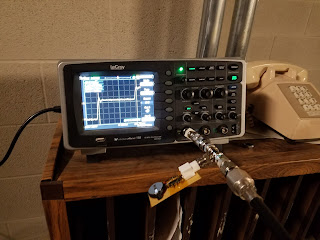 Here's the oscillator hooked up to a small LeCroy 60 mhz oscilloscope up in the penthouse of my building.  That scope is nice and portable, which made it perfect for this task. 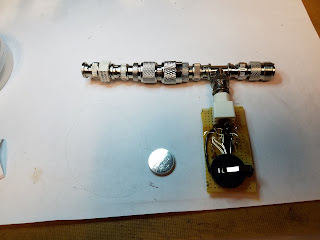 Note the boondoggle of adapters one can end up with, if your bag-o-dapters is missing a few things!  I made note of what to pick up at my next hamfest!

All in all, it worked great and served the purpose. It's small and easy to use.  I've popped it in my toolbox with my adapters and other "antenna and coax" tools.   Project successful!