I found an RCA WV988 VTVM at a hamfest.  It was labeled "Works - $10".  I figured it would be a fun project to learn a little about recapping and tube based equipment.  It has a minor crack in the face, but I don't really care.  I'm more interested in this VTVM for the "puttering" aspects than for usability.  Still, it'll be nice to have an analog meter on my bench if I get it working well.  It's got a nice big display, and the crack doesn't impede use.

I managed to find a manual for it online.  It's one one electrolytic cap, which I'll replace.  It's also got a selenium rectifier, which can release toxic "magic smoke" at failure.  The interwebz recommend replacing that with a diode and series resistor.


A previous owner had soldered in a D-cell battery to operate the Ohm meter.  I'll pull that out, and put in a battery holder.  Also, clearly in view are the electrolytic capacitor and the selenium rectifier that will need to go. 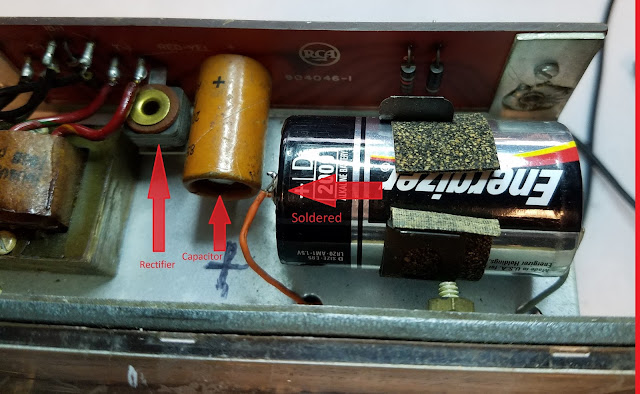 
I went through and tried all the basic functions.  They were all pretty good, though it was slightly out of calibration.  I'll go through and attempt a recalibration after repairing it.


Easy enough.  I desoldered the D-cell, and put in a AA battery holder.  I drilled a small hole in the plastic holder, and countersunk it a little. I used the existing screw to install the new holder.  I soldered in the wires and used a bit of heat shrink to insulate. 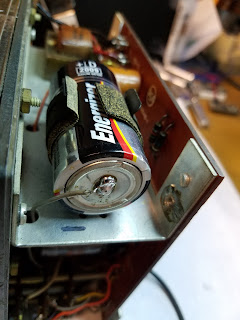 The Old Battery, Soldered in. 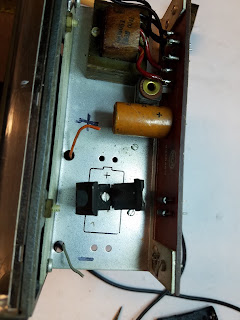 Battery removed.  I'll reuse that screw in the center of the old holder. 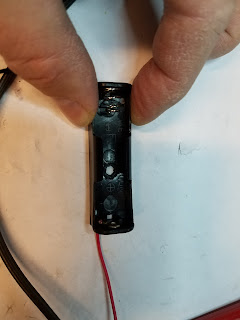 Hole drilled in AA holder, and countersunk a little, so the screw isn't in the way of the battery. 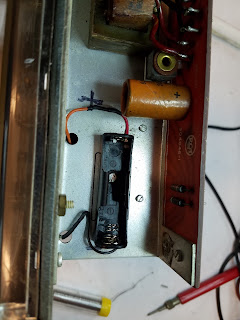 Installed, with a little shrink-wrap on the wiring. 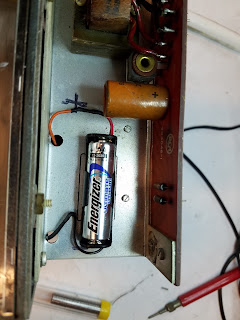 Now the battery is easily replaced.


Replacing the cap and rectifier


The cap was a 20uF 200v.  That was easily replaced.  The rectifier is rated tat 20mA.  It's easily replaced with a 1N4004 diode and a 2 Watt, 820 ohm series resistor.   I followed the basic recipe in Rich Bonkowski's (W3HWJ) excellent article.  I tried a few different resistors until I got a voltage that matched what I was reading prior to the replacement.

Since I was installing one additional component (the resistor) in series, I drilled two new holes in the board, and ran the diode to one of the new holes, and then connected the resistor from the adjoining hole to the other rectifier pin.  Since there was no trace on the board for that connection, I simply extended the leads to one another, twisted them once, and soldered them together.  The result looked nice and tidy. 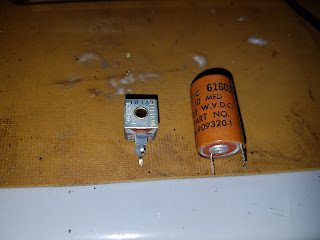 The old rectifier and cap. 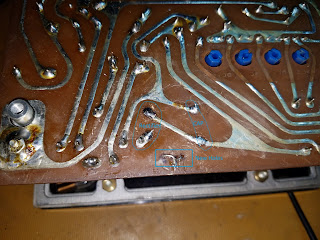 The PCB from the back side.  The two new holes (bottom box) have leads through them from the diode and resistor.  I simply twisted together and soldered them.  The existing pads from the rectifier and cap are marked. 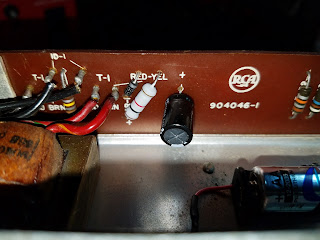 The final installation of the diode, resistor and new cap.

Upon testing, it appears that the DC voltage calibration was off, and it is at the limit of the variable resistor for tuning.  It's off by around 1 volt.  More follows as I sort out the issue.