Hojo and the case of the faulty FT-2800M

Hojo and the case of the faulty FT-2800M

A friend, Joe / W2IFB mentioned that he had a Yaesu FT-2800M fail on him.  He had been keyed in a long QSO for more than 10 minutes when the radio failed, catastrophically.  Thinking that he had blown the final, he tried replacing the final transistor.  Unfortunately, it didn't work.  He reported that the radio was basically in a "short" when plugged in.

He gave me the radio and said "It's yours!  If you fix it, maybe I'll buy it back!"  I accepted the challenge.


I took the radio and set the current limiting on my power supply to 300ma, figuring that would be sufficient to demonstrate a problem.  I plugged the radio in, and sure enough, it was drawing current HARD.  Placing my ohm meter across the power leads, it showed 0 ohms.  It's in a dead short.


I opened up the radio and snooped around the board a little.  I saw the power transistor that had been replaced, but didn't see any shorts nearby.  It also seemed unlikely that a problem in the final would cause a dead short when the radio was still powered off.   I also observed what appears to be a two-turn inductor coil that may have gotten a bit smushed.  None of this looked like the cause of the short, however. 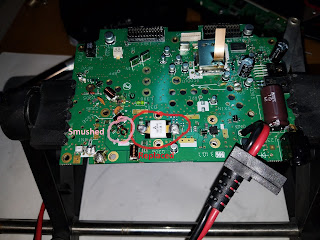 I pulled out the schematics and took a look at the routing of the power.  I assume the short must be very early in the circuit, since the unit uses a soft power switch, and it hasn't even been powered on. Glancing at the schematic, and board, I saw a few voltage regulators, and a protection diode. 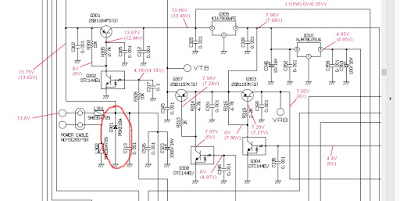 The protection diode was right near the edge of the board, and an obvious first thing to check.  It's a clamping diode, so a surge of some kind may have caused it to fail. 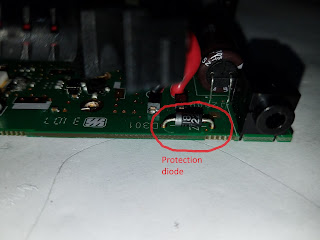 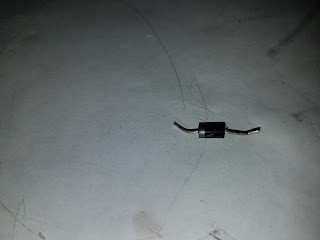 Yaesu is kind enough to list the manufacturers part number in their service manual.  Digi-key has the part for $0.48.  I'll tuck one onto my next order.

Hooking up a more beefy power supply, I was able to run through a full suite of tests, and confirm that it was simply the diode at fault.  The radio was working just fine.

I ordered up the diode and got it in from Digi-Key.  The installation was trivial.

I went ahead and did a few tests prior to aligning the radio.  It was transmitting about -650 hz off frequency at 146.000.  Most other metrics seemed good, though it was only making about 50 watts on high power (should be 65).

The perform the alignment, I needed to inject signals into the microphone port.  I decided to make a jig that I could use for this project, and in the future. 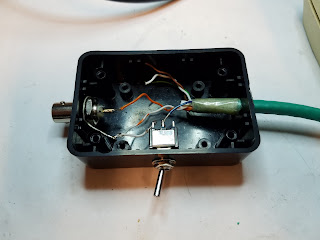 I built a 6-pin cable to use for the project, and sorted out the pinout.  Yaesu uses a common ground for the Mic and PTT.  The Mic inputs go to the BNC port.  The PTT goes to the toggle switch. 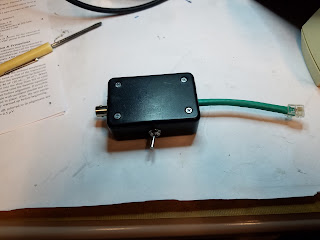 The finished product.  Now I can pump signals right from my service monitor into the mic port on the radio.  The toggle switch makes it easy to engage the PTT without holding a button,

I followed the alignment procedure from the manual.  Notes here for posterity.

All other setting values were already optimal when measured, and were left alone.  Current readings on transmit were all well under published maximums.